With only a couple INPreps at the defensive back position with a major FBS offer, it’s safe to say the position as a whole is under the radar. However, some of these guys will blow up this evaluation period and throughout the summer. 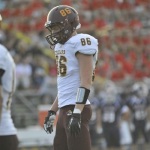