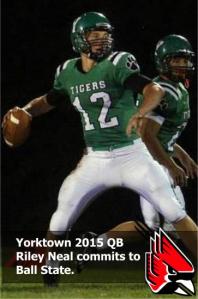 Yorktown  high school signal caller Riley Neal made his commitment to Ball State today. A school that he and his family are very familiar with. His dad and uncle were both scholarship football athletes for Ball State, with his father playing defensive back and Riley’s uncle playing running back. However that had little to do with the 6’5 200 gunslinger choosing to play for the Cardinals for the next 4 years. Neither the fact that his high school is nearby. He’s excited about the staff, recent success and recruiting classes.

When asked what were factors in decision, Neal said “I’d say more the coaching staff and recent success. My family having some heritage there is cool but it didn’t affect me too much. Traditionally they are not only a premier team in the MAC but they also have had their last 2 QB’s get drafted. Lastly their recruiting class is really starting to heat up in this class. Don’t be surprised when they have the best recruiting class in the MAC at the end of this recruiting cycle.”  He also noted that the style of play on offense for Ball State is similar to what he runs at Yorktown. Also the flexibility the quarterback has in making decisions.

Neal will visit Ball State tomorrow. He says his recruitment is finished and will not make any other visits. He held other offers from Central Michigan and Illinois State.