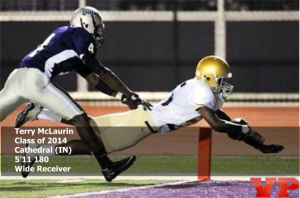 McLaurin looks fast on film and this past February at the Best of the Midwest Combine, he blazed a 4.4 in the 40-yard. The speedster set two Class 4A state championship records with a 79 yard reception for a touchdown and a 66 yard punt return for a touchdown. His big play potential boosted his recruiting into the next gear.

The Purdue Boilermakers were the first to offer McLaurin a scholarship followed by the Toledo Rockets, offering on his unofficial visit. McLaurin shared with us why the Boilermakers are in the lead for his services after visiting West Lafayette on Tuesday. “It was a great overall visit, it really felt like home,” said McLaurin.

He also noted that he’s very comfortable and familiar with the staff. “I got to spend time with Coach Sherman and watch film. I have a good relationship with everyone, from the strength coach to the operations guy.”

Purdue impressed McLaurin to the point he stuck around after practice and watched film. “The energy was great, I could fill it throughout the whole day,” noted McLaurin.

Although the Boilermakers are in the lead, he still plans to visit Ohio on Saturday. He also mentioned that Missouri, Northwestern, Illinois and Northern Illinois are actively recruiting him. The race is on to land the speedy receiver and McLaurin has no plans of slowing down on the field or on the recruiting trail.