Preps2Prospects an off season football development brand based in Indianapolis is known to have some of the area’s top athletes apart of their club 7 on 7 football program. Each Winter the group host a tryout showcase for hundreds of athletes who want to take part in the off season program. Indiana Preps will get the INside Track on some of the top prospects and rising prospects in the state.

Like anything else in football, a great team starts with the quarterback position. Preps2Prospects Director Harvey Scruggs is pleased with the quarterbacks on the team’s roster. In year’s past the Preps2Prospects team has had big time recruit at the quarterback position. Scruggs said “We don’t have the big name guy at quarterback and that’s fine. We have guys who are accurate and can throw with velocity.” Scruggs depends on his coaches to get the kids ready to compete. “I have one of the best quarterback coaches in the area in Jimmy Weddle, who also coaches for the Elite 11” Scruggs said. “He can get the best out of our guys.” There are a few quarterbacks Scruggs believes will have a shot to play college football.”I really like Azjai Cooper (Ben Davis/2017) and his confidence. He’s a quarterback who happens to be a great athlete.” There are a few other quarterbacks Scruggs and Weddle are eager to see in this fast paced sport. “Jake Reid (Indianapolis Lutheran/2016) has all the tools, he’s just not 6’0 plus” said Scruggs. Other names to look for are Southport’s Luke Johnston and Chicago Illinois transfer Alphonso Howard. 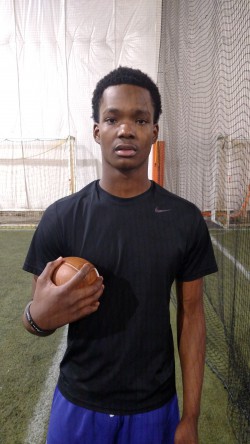 Scruggs believes the athletes at the skills position on offense is some of the best he’s ever had. That starts with INPrep50 Ben Davis 2016 product Chris Evans. Scruggs calls Evans a “differance maker” because he’s able to line up inside, outside or in the backfield. He also believes this may be the fastest team on offense as well. 2017 wide reciever Zion Blow (Ben Davis) impressed the coaching staff by leaving defensive players in his trail. “With Blow, the ole adage 1 on 1 equals 1 on none is true when it comes to Zion. He can flat go” said Scruggs. Columbus North 2016 wide receiver Alex Algee adds speed and size to their team and Scruggs calls him a “sure catcher” with strong hands. Warren Central 2017 wide receiver Paul Minor Jr. is balancing basketball and 7 on 7 football right now and showing that he’s capable of being a division 1 recruit.

The defense is led by two INPrep50 safeties in Jackson Cain (Huntington North/2016) and Ben Stewart (Cathedral/2017). Scruggs is estatic to have these two physical type safeties playing 7 on 7. “They bring a bit of toughness to 7 on 7 even though we are not wearing pads and there is no tackling” That doesn’t mean they’re not phyical which Scruggs pointed out. “They make it hard for you to catch anything across their face, because you will notice them” Scruggs also likes that they have ball skills as well. There are three freshman that have the coaching staff smiling from ear to ear at the cornerback position. Defensive back coach Ledarrius Calvin believes he has three kids with speed, toughness and great athletic ability. Starting with Columbus North 2018 defensive back Cortez Bandy.  Scruggs said “Bandy is a sure fire division one prospect.” He noted that his long arms and ability to turn and run is why coaches will love Bandy. His frame is already that of a senior in high school standing 5’11 and weighing 190 pounds. Bandy also possesses 4.5 speed. The 7 on 7 coaches love the physical play of Ben Davis 2018 defensive back Jontae Dobson. “He will get in your grill and reroute you until the ball is in the air”said Scruggs. “He’s a very confident kid and his skill set backs it up.” Elijah Ball (Cardinal Ritter/2018) is a another young cornerback that has coaches excited about the defense. Scruggs praised Ball for his ability to track the football in the air for being so young.

The linebacker position is also stacked with some good area talent in Matt Thompson (Avon/2016), Joe Izbicki (New Palestine/2016) and converted linebacker LeShawn Johnson (Ben Davis/2016) who plays running back in the fall.

Indiana Preps will continue to offer coverage throughout the Spring and Summer.