Carmel (Ind.) 2016 linebacker Noah Burks loved everything about the University of Wisconsin while on a previous visit to Madison and on yesterday, Burks gave his commitment to the Badgers. There were several factors that went into his decision to commit to the university and football staff. ” I think that it’s the perfect fit for me, I just loved the place after I visited, plus it’s not too far from home. The fans are unreal, players are all blue collar which is my style. I have great relationship with coaching staff, love the tradition of the program, and it’s a great campus” said Burks.

Burks also felt the transition to the next level will be smooth in terms of the Badgers defensive schemes. “It’ll be the easiest transition since we run the same defense and I don’t have to change anything I do” said Burks.

His commitment to Wisconsin came shortly after receiving an invitation to play in the Semper Fi All American bowl game held for outstanding senior football players across the country. Burks calls the invitation a huge honor and special because his grandfather was a Marine. “That’s the bowl I’m probably gonna play in even if I do get invited to another one. It’s special to me because my grandpa was a marine and its out in L.A., which I’ve never been to before. So I’m excited for the opportunity plus it’s an uprising All-American game” said Burks. 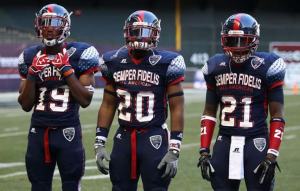 The Carmel product is the number one ranked linebacker in the state according to the 2016 INPrep50 rankings.