GAME OF THE WEEK, HIGH SCHOOL FOOTBALL, IN PREPS

INPreps Week 8: Game of the Week

Throw out the records when it comes to  No.2 Carmel and No.1 Warren Central. The two powerhouse programs are responsible for 8 state championship titles since 2003. During that stretch, they faced each other in the title game three times, including last year’s state game, wWarren Central beat Carmel 7-6. In the last 30 years, Carmel leads the series 20-18. Both come in tonight’s game without a blemish on their record and the winner will be the outright MIC champion. 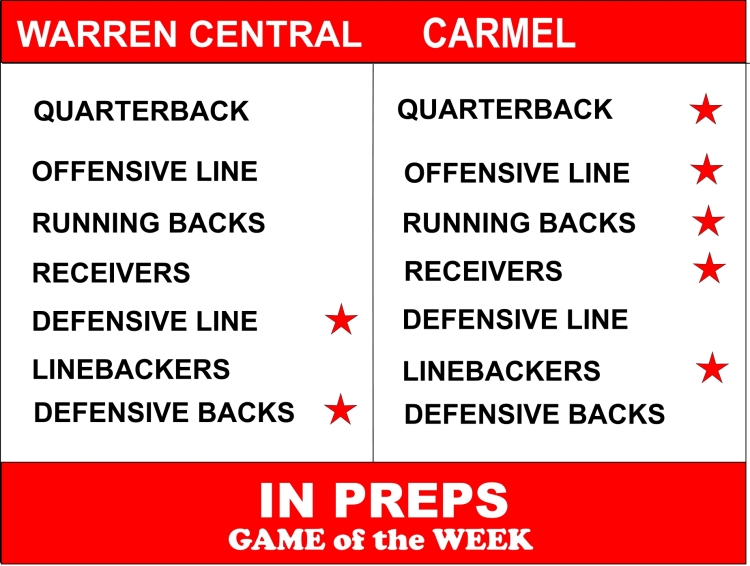 Key Factors
No.1 Warren Central: Warren will need to establish the run, move the chains and keep Carmel’s offense off the field. Senior RB Tirone Young and Mr. Do-it-all Mykelti Williams will lead the ground game. Warren has been stingy on defense allowing just 13 points per game. The defensive line will need to apply pressure and stop a really good rushing attack from Carmel. Warren’s defense knows how to show up in tight games.

No.2 Carmel: Carmel’s offense has averaged 45 points their last four outings. Quarterback Michael Viktrup has been great at managing the Greyhound offense. The running game has taken pressure off Viktrup by gashing opposing defenses. Last week the Greyhound rushing attack rolled up almost 500 yards against a pretty good Ben Davis team. Senior Isaac James is the x-factor for the Hounds. Noah Burkes is as good as they come at the linebacker position. The Carmel defense is fast, aggressive and will need to corral Warren’s run game early in order to win.

WINNER: Carmel 28-24
Coach Wright has the Greyhound offense rolling, putting up huge numbers on quality opponents.I expect Warren to give Carmel a tougher test, but in the end the Hounds will find a way to win.