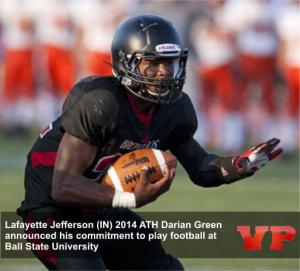 Lafayette Jefferson (IN) 2014 ATH Darian Green announced his commitment to play collegiate football at Ball State University. Green at 5’10 185lbs is a versatile back, with great hands and speed. He will pose a threat to defenses by taking handoffs, playing slot receiver and returning kicks potentially for the Cards. Last season the Lafayette Jefferson product rushed for close to 1400 yards and added 14 touchdowns.

Head Football Coach Pete Lembo expressed his excitement via twitter about Green being the first commitment in the 2014 class for the Ball State Cardinals football program.