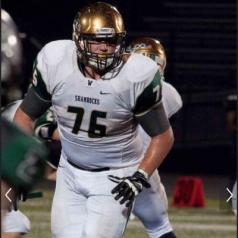 We are a little over halfway through the season and a blockbuster matchup is on tap for week five of Indiana High School Game of the Week. The Ben Davis Giants, ranked 6th in the state, travel to number one ranked, Warren Central Warriors to do battle in the Circle City Showdown. Each program has only one loss on their record and have posted convincing wins through the first half of the season.
The Ben Davis Giants continue their program dominance this season by soundly defeating opponents by an average of 45 points with the 70-0 rout of Arsenal Tech to start the season. The Giants keep their offensive attack balanced with an average of 180 yards passing complimented by an average of 154 rushing yards. Quarterback Reese Taylor not only leads Ben Davis in passing yards but also in rushing. Another dual threat for the Giants is Senior wide receiver, Azjai Cooper.

He started at quarterback his junior year but a shoulder injury in week four sidelined him and head coach, MIke Kirschner, made the decision to start Taylor in his place. Cooper was asked to move to wide receiver which he did and without complaint according to Coach Kirschner. However, during practice last week, Cooper was injured again and was not available for the Center Grove contest. If that wasn’t enough, Cooper suddenly lost his father in a tragic car accident in early September.

“He never missed practice or a meeting in spite of the difficulties he is facing,” said Coach Kirschner.Cooper has a bright future as a commit to Division 1 Eastern Kentucky University on a full scholarship. Ben Davis has a lot to play for on Friday and it goes beyond bragging rights.

The Warren Central Warriors, ranked number one in the state, is playing host this Friday as they continue to break in their brand new field. The Warriors possess a strong passing attack and they accomplish this by using a two-quarterback system. Seniors Zach Summeier and Tristen Tonte split the workload throughout the game. Summeier handles most of the passing, while Tonte can split the defense with a pass or a run. In fact, Tonte leads the Warriors in yards rushed per game with an average of 65.8. Warren Central is coming off a close win against defending state champions, Center Grove.

Expect a high scoring game as these conference rivals clash on Friday night. Ben Davis and Warren Central average 33 and 27 points per game, respectively. Warren Central owns the rivalry with a 53-32-3 advantage against Ben Davis including the last three contest. – @IndianaHSGOTW 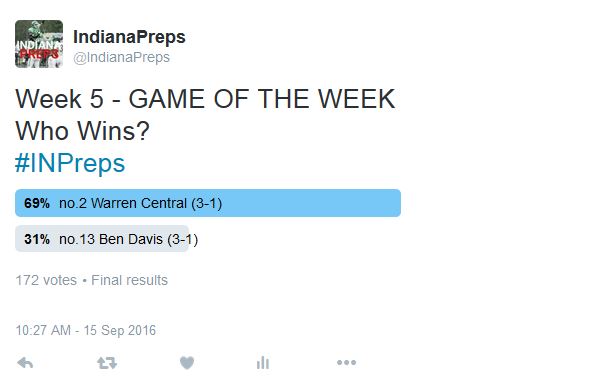